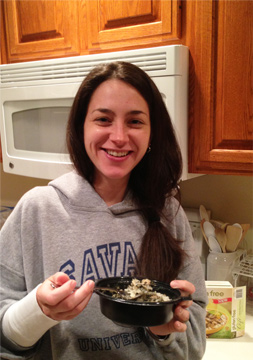 I seize every opportunity to figure out gluten free foods that are palatable since, in all honestly, many of them are quite gross.  Whether it is a chalky texture or unidentifiable aftertaste, lots fall short of being deemed good.  It takes a bit for me to give it the okay because, as we all know, gluten free specialty foods don’t come cheap.  This frozen product trial was based on an inquiry of mine from the other day.

At the grocery store two days ago, I was waiting in line for the butcher.  I eat a lot of meat and I had a question, not a big deal.  While I was waiting, I was looking at other people’s carts.  This is a solid habit of mine to see what people like, etc and this time it actually paid off.  The woman at the counter had some gluten free frozen foods boxes in her cart.  Maybe five of them?  After she was done, I forfeited my spot in line to ask her about the foods she had picked up.  This lively lady, who I noticed had been previously talking a lot with her hands, informed me that she loved them and she let me take a closer look at exactly what they were.  In her cart were Gluten Free Cafe’s Lemon Basil Chicken.  I thanked her for her input and rolled on over to the gf frozen food section.  Yikes.  On the expensive side.  A frozen meal for over $6.  Ouch.  But, it’s worth a shot.  All of our special foods cost more and sometimes you just need a convenient, pop in food that isn’t mac and cheese.  I put one in my cart, checked out and stuffed it in my freezer at home. 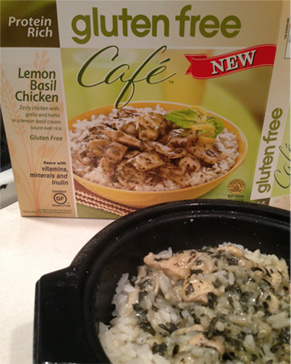 Fast forward to tonight.  I didn’t like my meat.  Figures, right?  Something about it just didn’t seem right and made me nervous.  Almost had a liver after flavor?  Liver is my least favorite food, second to none.  It turned me off and I was in search of something.  I popped the Gluten Free Cafe entree into the microwave according to the directions and six minutes later, I had a warm little meal.  First taste of the sauce, I thought, ewwww.  Too much basil.  I’m not a big fan of over seasoning either.  I stirred it around with the rice and took another bite.  Very nice!  The rice balanced it out.  Yay!  There wasn’t as much chicken as they lead you to believe on the box’s front picture but that is always a problem with frozen entrees.  I won’t fault them for that.  The sauce was velvety from a discernible amount of butter and cream.  I was still a touch hungry after I was done, but I eat a lot.  And I’m never full with a frozen meal, so this isn’t unusual for me either.

Overall?  It is a little small and a little pricey, but tastes far better than a typical frozen entree.  It will definitely make its way into my rotation, but I will be keeping my eye out for a sale!