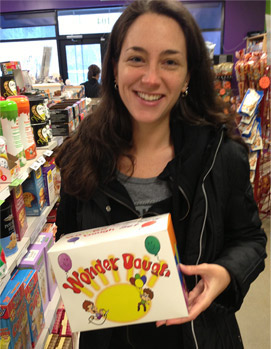 What toys did you play with when you were younger?  I remember that one year, under the advisement of my mother’s co-worker, I was given a Kid Sister doll.  It sat there in the box until it was donated to a school charity.  No harm in trying, but I’m not a girly girl.  I was a fall off the monkey bars and out of trees girl, who liked trucks, building blocks, crafts, coloring and of course, Play-Doh.  That was me, and still is. 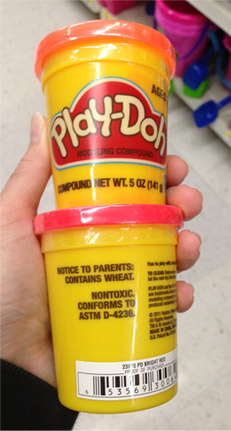 Play-Doh Is Not Gluten Free

It was the other day at Gluten Free Zone in Murrysville where I was reminded that my beloved Play-Doh is not gluten free.  That’s correct, Play-Doh contains wheat.  You may say, well you aren’t supposed to eat it.  I agree.  But while I may not have eaten it, I definitely recall licking my hands because of the salty residue I craved.  Sounds gross, but as a kid you do those things, and if your child is celiac or sensitive, they should be given a safe alternative.  A heavy box at the store contained just that.  Wonder Dough is a gluten free Play-Doh alternative as is Colorations Wheat and Gluten-Free Dough which I’ve heard positive things about.  Don’t like that idea or think it is too expensive?  You could also make your own!  And it is a project to do with your little ones as well!   Talk about doubling the fun!

I found a lovely site by One Creative Mommy that made and reviewed a few different do-it-yourself toy dough recipes.  They are all gf.  So take a minute and drop by her gluten free play dough recipes and decide which best suits you and your child’s needs.  Happy sculpting!