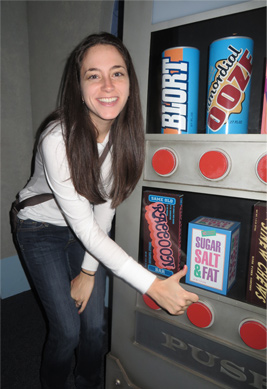 I Found This Amusing, December 2013

In yesterday’s post, I explained the methods I use to try to stay safe at restaurants while dining out; today is about determining which foods are gluten free so you don’t get sick cooking for yourself.  Yes, you can gluten yourself.  I can’t say that I never did it.  By not reading carefully enough or assuming an ingredient is safe, it is easy to do particularly early on.  You can eat naturally gluten free foods like eggs, meat, poultry, fruits and vegetables, but let’s face it, it’s unlikely that that is all you’ll want to eat ever again.  It isn’t impossible and I did it for an extended period of time while I was adjusting, but most people would like some replacement foods for the family recipes they are craving.   And the more ingredients there are, the more places you can make a mistake.  Part of how hard you have to dig has to do with how strict you intend to be.  Because of my harsh and quick reactions, I try to take it all the way to the end.  Here’s how I attempt that.

The art of reading labels.  Tons of people don’t even bother to flip over a box, can, bottle or package to look at the nutritional information, let alone read the ingredient list.  Many are filled with words that we can’t even begin to pronounce nor understand what they are.  It shouldn’t be that way, but it is.  (Random fact – Did you know that Cheez Wiz originally had actual cheese in it but now there isn’t?  It is full of those unpronounceable ingredients instead.  If you haven’t read the book Salt Sugar Fat by Michael Moss, I highly recommend it.  Terribly eye opening.)   They can be daunting and uninformative if you don’t know what you are looking at…and even sometimes if you do.  The number one thing you’d love to see on your food is this.  The unquestionable gluten free label. 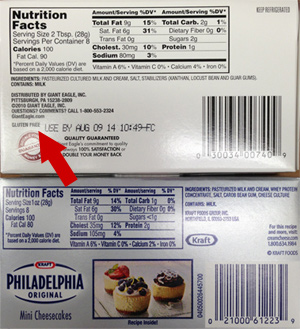 If you come across this, you can stop there.  Well, most of the time.  I’ve recently been seeing things labeled gluten free only to flip over the product and see that it was processed on a line with wheat such as Nut Thins.  (How can they get away with that?! I wish I knew!)  If you don’t see a warning about processing, then you are good to go.  I’ll often pay a touch more just for the security of the packaging and to not have to put in further effort.  You may also find that store brand products, such as this cream cheese, are labeled gluten free more than the big name brands. 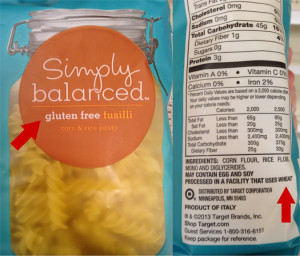 Front Says Gluten Free, Back Says Processed In A Facility With Wheat! Misleading. Click To Enlarge. This Shouldn’t Be Allowed….

In this case, I referred to Kraft’s website and came across this statement.  “A small number of Kraft Foods products are labeled as “gluten-free” according to the proposed definition by the Food and Drug Administration (FDA). These are: Crystal Light, Kool-Aid and Tang powdered soft drinks and some Back to Nature rice crackers. We take this claim seriously and for such products, we are assured there is no unintentional contact with gluten during every step of the agricultural growing, transportation and manufacturing process. You might notice that many additional Kraft Foods products may have ingredient statements that do not list a source of gluten, but without the extremely specialized procedures in place to diligently validate gluten purity, we do not label the finished product as gluten-free. In this way, we are very serious and thorough when labeling products as gluten-free.”  To me, that means they don’t consider it safe enough to label and therefore, I’m happy to go with the store brand and pay less instead.

Next step is running it through a search engine.  Try searching the company name and “gluten free” or the company name, product name and “gluten free”.  If the company website addresses it anywhere, it will likely turn up in your results to view.  Other blogs and articles may appear which could be helpful, but your ultimate goal is to get a company based answer.  Blogs can be out of date as product ingredients change often or they could have a better tolerance and not consider cross contamination aspects.

Didn’t work?  Try calling the number on the back.  No I’m not kidding.  I’ve done it a number of times.  The customer service number should be able to answer you.  If I have time or am looking up a food beforehand for a recipe, I’ve emailed companies my questions because I could wait for a response.  I just don’t like using the phone in general.  (hehe, My ringtone is Beat It because that’s how I feel when it rings.)  At this point, you should definitely have an answer.

Not into contacting the company and want to try to decipher the ingredient list yourself?   Fair enough.  Here are some things you should know about.

There are apps to help with this process.  The one I use and got for free no longer exists.  I decided to search what is would there now and downloaded one called Gluten Free Ingredients by Nations Software for 99¢.  Guess what I discovered?  It is basically identical to what I already have…they just charge for it now.  That’s okay though.  The straightforward list is quick to search and easy to understand.  Moving along… 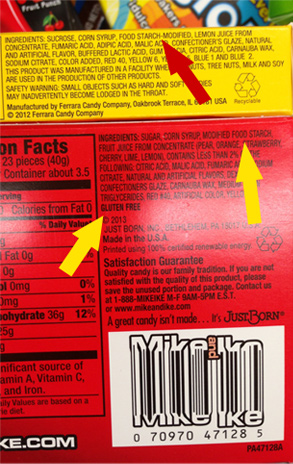 Some products seem obvious, like a can of corn.  I agree.  Buy it and move on.  But what about creamed corn?  It used to say modified food starch on the ingredient list, but now, because of the recent FDA labeling requirements deadline coming up,  that has changed and it clearly states that it is modified corn starch.  Soon these should all be clarified and if necessary modified wheat starch, modified starch (wheat) or an allergen warning on the label will identify it.  Companies like Del Monte clearly addressed the issue on their website in the past stating, “Our Modified Food Starch is derived from corn. It is gluten-free.”  While the corn can has been updated, not everything has.  These boxes of candy did not identify their food starch source and the one that is not also labeled gluten free, I would still look up.  That said, just because they are to list wheat does not mean that extends to all gluten containing food.  They do not currently have to label other gluten containing ingredients such as rye and barley!  Think Rice Krispies vs. Gluten Free Rice Krispies.  Prior to the release of the gf version, you had to know that malt was a barley product and that barley has gluten.  It doesn’t have to be labeled like wheat. 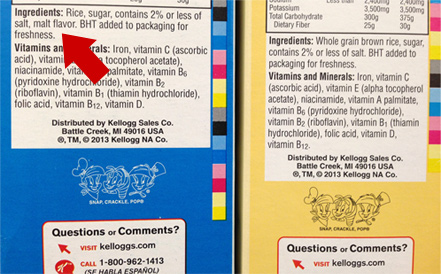 Other words to look for on boxes aside from “wheat, rye or barley” include:

There are more, but these are some of the easiest to miss.  This is where the app comes in handy.

Caramel color is another one that could be made from corn or wheat.  It is claimed that in the US, it is all corn based, but to me, all is a strong word.  Kind of like never.  Pointing it out just to keep it on your radar.

Maltodextrin is one that is highly argued because of “malt” being in the name.  It is gluten free.  According to the FDA (referencing a variety of places on the FDA website including a Gluten Free Labeling Powerpoint presentation), it is derived from corn starch, potato starch or rice starch unless otherwise noted.  Other countries occasionally derive their maltodextrin and dextrin from wheat though, so heads up if you are traveling abroad.

Another tactic I use is keeping folders with bookmarks on my phone with one of them being titled Gluten Free Groceries.  Once I find answers, or lists of safe foods, I bookmark them.  That way, I don’t have to look them up every time I go shopping.  I can click it and move on.  The lists should be updated as changes are made, but be aware that they may have changed the link name.   When companies post lists like these, they often break them down into which products have no gluten containing ingredients and are considered gf, and those that have no gluten containing ingredients but could be processed on the same line as a product that does.  Therefore, cross contamination.  At that point, you are choosing what level of glutenfreeness you are going after.  These are a few that are frequently accessed in my folder.

Bush’s Labeling – Both Gluten Free But Only One Is Labeled

Some brands only label certain products of theirs.  An example being Bush’s.  Perhaps they feel like they’d be stating the obvious by labeling their basic cans of beans, but help folks out by labeling their cans of baked beans which have more ingredients?  I’m not sure of their logic, but I look up everything.  If you go to their website, a FAQ addresses this in which they say, ” As of this date, all of our BUSH’S BEST products are gluten-free.  We do use corn starch in some of our products, but it does not contain gliadin gluten from wheat, barley, oats or rye grains which may cause adverse responses in persons suffering from Celiac Sprue. In addition, any vinegar used in our products is corn-based and distilled.”  Okay then you are done.

I also stay away from anything that says it was processed in a factory with wheat.  Wheat drifts around, so as a general rule, it is a no to me.  That said, when I first started out I did eat those products.  As my body adjusted to no wheat though, I became more sensitive and triggered more easily.  Some products I know I can handle from that timeframe and others I can’t.  I know I run a risk when I do it, but it is a decision you make for yourself.

The FDA regulations that were introduced are already visible on many products I’ve struggled with in the past.  We’ll see what happens in the future, but the way it’s going, a lot of this will no long be necessary.  Only time will tell.  As I said, this is how I go about it for the most part, but everyone is different.  Do what works for you and create a system of your own.  Good luck!