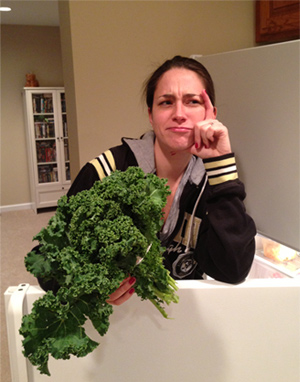 I noticed last night that there was kale on my plate for dinner.  That is the second time this week that the hearty vegetable has made its way into my meal.  Is kale a new veggie for me?  No, but it was once and could be for you.  In recent years, you couldn’t escape news or health articles about it.  Kale here, kale there, kale everywhere!  I’m not one to follow trends, but it sparked my curiosity and inspired me to test it out.  I like trying new foods, and this one is fully loaded with vitamins.  It is naturally gluten free and cheap, so I figured I couldn’t go too wrong.  And I was right.

What better way than to start the new year with kale?!  As you know, there is a list of traditional foods for the holiday and leafy greens, including kale, is one of them.  It is supposed to look like paper money and help make you prosperous if you eat it that day.  Each year I do a customary food or two, and I decided this was a smart one to alternate with but I didn’t stop there.  I decided that black eyed peas, considered lucky because of their penny like appearance (I don’t see it), could match well and the hunt began.  I landed on this Black Eyed Pea and Kale Gumbo recipe.  It was easy to adjust to be gf and I had everything I needed.  I made mine like this.

I cooked down the onion, garlic and celery on medium-high heat until the onions were almost translucent as suggested.  Then I added in the soy sauce, paprika, water, bouillon cubes and broth.  I let it come back to a boil, then continued to leave it until the celery softened up…my chop was fairly thick.  I then added the black eyed peas, leftover rice and kale, and let it roll on low-medium heat until the peas cooked. 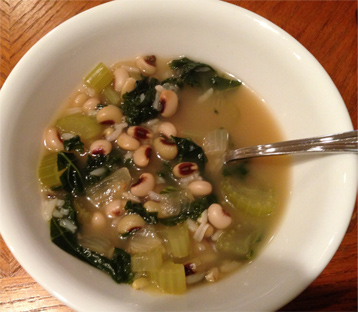 It turned out wonderfully and has made its way permanently into my recipe binder.  See, that wasn’t so hard.  Making a soup that happens to have some kale tossed into it?  I’ll keep posting other easy, go-to kale recipes throughout the year, since it is obviously a nutritious part of my gluten free diet and now hopefully yours.