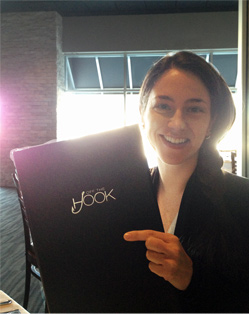 The seafood restaurant Off the Hook, or OTH, is OMG!  This pearl is located north of Pittsburgh in Warrendale and is worth a trip if you don’t live in the Cranberry area.  You often hear me say that my meal was good, but I can’t justify the price, that is not how I feel about Off The Hook.  To me, they were successful in every respect.  From their gracious staff and informative chef to a nearly entirely gluten free menu and exceptionally chewy gf rolls, I would pay to go there time and time again.

My dining companion had arrived prior to me and was seated in a large, contemporary sea.  Between the carpeting’s wavy pattern and deep blue main wall adorned with a school of silver fish, you knew you were in for a treat.  Behind me, near the opposite wall were hundreds, if not thousands, of bottles of wine displayed behind clear glass.  After settling in and ordering an unsweetened iced tea with lemon, I began my gf spiel with my smiley waiter Dale.  He had already heard of my sensitivity from my fellow diner, and had popped in some gf rolls to come out with his bread basket.  He informed me that they prefer to send out the chef (when it isn’t excessively busy) to answer questions and explain things.  That was okay by me and about two minutes later, John appeared.

Those Are Some Soft Gluten Free Buns! Arguably The Best I’ve Ever Had.

Clearly a chef in his button up grey chef’s coat, John Dober began to explain to me that he can do almost anything on the menu for me.  He explained that they have gf pasta, rolls, soy sauce and other ingredients in the back to do so which is also why they do not print a special gf menu.  He went on to further explain why the restaurant has chosen to go to such lengths.  The owners have close relations with friends and family that have gluten sensitivities and designed their menu accordingly.  They looked to allergy-pro Disney (no joke) as their model.  They believe Disney displayed the highest level of understanding and care in their preparation and accommodations.

I ventured into asking about the fish entrees I was eyeing and he knowledgably explained his views on each.  While he can do everything I asked for as gf and most naturally were, he did explain that it adjusts the taste on some foods and wouldn’t necessarily recommend the varied version in a few select cases.  That’s fair.  Most have a couple preparation styles listed and they all sound scrumptious.  After I was done questioning John, I shook his hand and he departed back to the kitchen for Dale to return.

I ordered their OTH Style Steamed Littleneck Clams appetizer.  They offer three versions, two of which are gf, the third is not because of their dashi.  All sounded phenomenal.  I picked theirs because for one, I like butter and two, it used Italian seasonings and fresh tomatoes and I’ve only had them done traditionally in the past.  Plus, I can’t get enough tomatoes.  They were thoroughly garlicky, fragrant and fresh.  They were gone soon, as were my two gluten free rolls that I was scared to eat at the start because they pulled apart like a normal bun and had a slight sour bread aroma.  I was apprehensive thinking maybe I was given the wrong buns but nope, they were all mine!  (Note – Because they have gluten free bread, they can also make their crab cakes gluten free.) 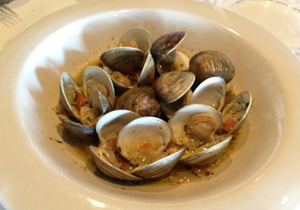 With perfect timing, Dale came to clear away the remnants of our mollusks and let our fish make an appearance.  I ordered the Char Grilled Carrot and Ginger Halibut which was naturally gf with no adjustments needed.  Biting into my generously sized piece of fish, the light char mixed with the sweet sauce flawlessly.  It was better than imagined and would recommend it to anyone without a second thought.  I had also toyed with ordering the Mojito Chilean Sea Bass with a mint and lime marinade and chimichurri sauce.  The only change that needed made was an adjustment to the marinade.  My fellow diner ordered it gluten free so I could try that as well.  The plating emphasized that it was delightfully fresh and serving size suited him well.  I only had a bite, but it was enough to know that I’d order it and he clearly enjoyed his choice thoroughly.

Mojito Chilean Sea Bass & Carrot and Ginger Halibut, At Off The Hook

Can’t stop there, can I?  Not when things are going so well.  I need dessert!  The  Triple Chocolate Latte is clearly labeled gluten free.  It is a flourless chocolate cake with whipped Chantilly cream but that one was all about the presentation.  It came in a coffee mug with chocolate pieces made to look like steam coming off it.  So cute! 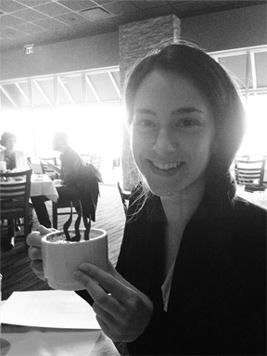 My Dessert. Isn’t It Cute?!

Preparing to leave, I met one last person.  She was checking in on how our visit was and from what I gathered, was an owner.  Lovely long red hair and a bright personality to match, I told her about our experience, how I chose it (I had emailed them and they pleasantly informed me about their many gluten free preparations and gf bread which could be used to even make crab cakes if desired.)  and how helpful Dale and John had been.  I can justify Off The Hook.  My trip was enchanting from start to finish.