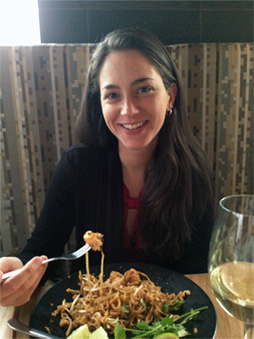 During some discussions about gluten free dining in Pittsburgh with the MeetUp group, I heard Casbah mentioned a handful of times. Diners were in agreement that the big Burrito Restaurant Group establishments were a good experience, but noted that they do not have actual gluten free menus (I also confirmed this via email with Kaya, Soba and Casbah).  That’s the part that always paralyzes me for a second, but when given a chance to try one I agreed anyway.

If you live in Pittsburgh then you’ve already heard of at least one place owned by them, Mad Mex, but each of them are quite different.  Eleven boasts contemporary cuisine while Kaya is island inspired cooking, with both situated in the Strip District.  Three more are found in Shadyside.  Umi featuring sushi and Japanese dishes (which according to them is limited when it comes to gf options), Cashbah highlighting light Mediterranean fare and Soba serving Pan Asian delights.  I landed at Soba.

At my arrival, I learned that they have complimentary valet.  Actually, what I found was a parking lot that said it was for patrons of Soba, so I parked there, and then a valet person informed me.  Fair in saying, I should have noticed, but to me the sign was a bit misleading.  I just don’t like handing over my keys.

Knowing they didn’t have a gf menu, I didn’t even bother asking for one and admired the mini Zen rock garden housed under glass in the hostess’ counter.  Rather, I waited for the waiter to come by, pour glasses of water and inquire about drinks.  At that point, I let him know that I’m gluten free and asked him to guide me through some options.  He seemed fairly knowledgeable running down the menu from top left appetizers to bottom right rice and noodles.  He told me what would need adjusted in a few cases including the Pad Thai which would involve removing the chicken.  It still had tofu and shrimp though so I ordered it.  (This being after I tried to order the Shiitake Udon which the waiter hadn’t been completely sure of when reciting choices.  It happens.  Better than finding out the hard way.)   I rubbed the smooth black rock which adorned each place setting and talked while I waited for my noodles, tummy growling a bit.

When the food hit the table, I pushed it around with my fork to confirm that there wasn’t any chicken visible and then started in.  I completely forgot to take a picture prior to me destroying it, but managed to momentarily stop for one a few bites in.  I would definitely order it again if I went back.  Plenty of peanuts to please Dumbo, pleasantly sauced and not overly cooked rice noodles.  As I often say, it is hard to justify the price, but I’m glad I tried it.  Without a doubt, I’d try another one of the big Burrito restaurants for a special occasion in the future.