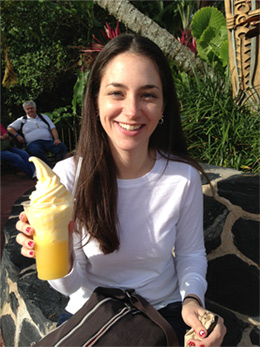 What is the best gluten free food in Walt Disney World?  Pineapple Dole Whip Floats!  They are arguably the best edible item, gluten free or not, in all of the parks in many peoples’ opinions.  They have a very devoted following to say the least, with numerous pages dedicated to the topic.  We may often have to turn down slices of birthday cake or pass on pizza at parties, but this time we can be in on the appetizing action.

So what is this glorious frozen delight, you ask?  A Dole Whip is a soft serve goodie available in pineapple, orange, vanilla or swirled and served in a cup.  FYI – Currently pineapple and orange are considered vegan! Personally, I’m a loyal pineapple addict (Pineapple Dole Whip).  It tastes like biting into a fresh chunk of pineapple but with a smooth, yet not really creamy texture (it is a non-dairy product).  As if that isn’t good enough, you can turn it into a float with pineapple juice!  It is hard to describe, as I’ve never found anything else like it before, but I will point out that after watching others order, it seems that they prefer floats to the classic whips.  Either way, you have to try it to understand! 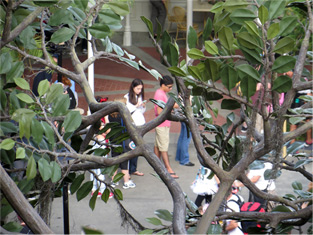 Where can you find this magical Dole Whip Float?  Most of us wait in a long line full of loyalists at the Aloha Isle in Adventureland in the Magic Kingdom (across from the Swiss Family Treehouse), but you could also hit a self-serve machine at Captain Cook’s in the Polynesian Resort.  It is a short monorail ride away if you feel like taking a break from the park for a bit or are staying there anyway.  If you are headed to Disneyland, you can find Dole Whips in their Adventureland at the Tiki Juice Bar (near the Enchanted Tiki Room).  There is nothing quite like a cool, refreshing gf treat on a hot vacation day, so grab a Disney Dole Whip and eat up!

For more help with gluten free dining at Disney, read about this useful dining app.