Gluten free dining in Orlando’s Downtown Disney is fairly hit or miss.  If you are willing and able to take the time for a sit-down meal, then you will fair far better than trying to get something quick to go.  No need to be discouraged though.  All the Disney magic in the air has brought about a mini miracle. 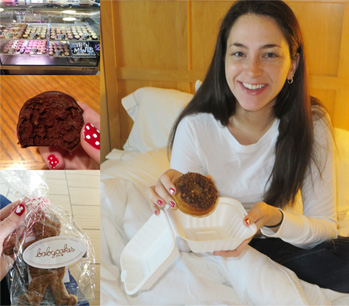 BabyCakes Bakery NYC has a small shop set up in DTD loaded with gluten free doughnuts, cupcakes, cookies and rotational sweets.  After tripping over a suggestion of this place in an online group I frequent, I decided to stop in and test some things out.  I’m glad I did.

As I stepped up to the loaded display cases, I was excited but a bit overwhelmed by the fact that I could pick anything I saw, so I took it slow.  I picked a French Toastie cupcake and then asked the girl behind the counter what her favorite doughnut was.  She referred me to two and after some discussion we got it down to their Cookie Crunch doughnut.  Since I had just had lunch at the Rainforest Cafe, I took them to go.  That was a mistake.  I should have tried it there so I could have bought more!  It wasn’t until the next morning that it sunk in.

I decided to have breakfast in bed (sort of) and as soon as I took the first bite of my doughnut, I knew I was going to be heading back there again before I left town.  It tasted like a spice cake donut but fluffier!  I couldn’t get over the fact that it wasn’t crumbly like so many gluten free options tend to be.  When I stopped back in two days later, I bought a chocolate dipped doughnut, lemon cupcake and two “cake balls”.  What is a cake ball?  Essentially, it is a brownie ball with chocolate chips in it that is covered in chocolate and looks much like a truffle.  I tried both the milk and dark chocolate versions because…why not?  Nothing let me down.  They all had desirable textures and an abundance of flavor.  If you aren’t stopping by Downtown Disney, you should still be able to find something around from them to nibble on.  I was able to find a BabyCakes NYC gluten free gingerbread man and fruit loaf at the Contemporary Resort and I know some things are available at other properties as well.  Treat yourself! 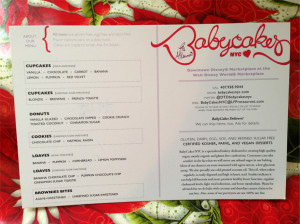 As for other dining options in DTD, this gluten free Disney dining app proved helpful again.  I opted for the Rainforest Cafe since I have a history of eating with them and know what to expect.  I happen to love their Mojo Bones ribs and always have leftovers.  Once I mention being gluten free to the server, they have always automatically sent a chef over to the table to talk with me.  He said that as long as I switch the french fries to mashed potatoes, I was good to go.  I think that’s good to hear.  I never suggest ordering with the assumption that the food is still safe.  Recipes and menus change all the time so don’t take the risk.

Other places that I’ve heard have a wide variety of gluten free menu options available include T-Rex which I have eaten at before and is owned by Landry’s (the same company as Rainforest Cafe), Fulton’s Crab House, and Splitsville Luxury Lanes on the West Side which actually labels their menu with GF icons.  Safe eating, folks!