I haven’t mentioned this yet, but I’m from the Pittsburgh area.  You know, Penguins, Pirates, Steelers, yinzers, bridges, Heinz ketchup (which is gluten free by the way), blah blah blah.  It’s possible that you realized this from the Double Wide Grill post, but I decided to clarify since the majority of my gluten free dining, shopping, escapades you could say, are clearly close to home.  Although, you can also see that I like to bounce around as much as I can… 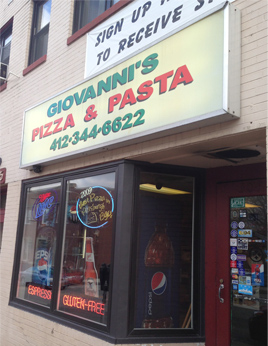 This lovely Sunday afternoon, I decided that I felt like driving out of my immediate area and maybe even over one of those lovely bridges we have so many of around here!  Eventually, I found myself crossing said bridge and landing in Dormont at gluten free friendly Giovanni’s Pizza and Pasta.  Yep, you heard me, gf Italian food.  Gluten free restaurants in Pittsburgh just took a whole new turn for the better today.  Not only are there loads of options, but they are clearly shown on the menu and they post the gluten free menu online as well!

I drove up, not quite sure what to expect, but a pizzeria it was.  The main door led into the standard takeout area, and to the right was a dining area with a wall dedicated to CHOCOLATES!  Yes, this lovely pizzeria makes amazing homemade gluten free chocolates, and I was greeted by a fully stocked case of the lovely sweets.  I took a seat at one of the tables, taking in the charming hole-in-the-wall atmosphere and began debating with what to try. 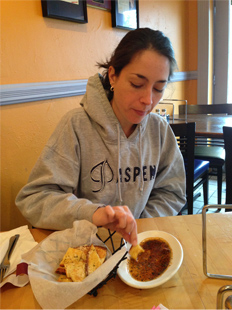 I ultimately decided on getting an order of pasta, specifically their version of Chicken Carbonara, because I also got a side salad and gf garlic bread.  I got to cover three foods in one meal.  It made sense to me.  And you know what, I loved them all.  I can’t say that enough.  I loved them all.

The garlic bread came out first, it wasn’t soft white bread but more like a toasted pita style covered with seasonings and parmesan-ed to perfection.  I didn’t think it could get any better until I swirled it around in the gf dipping oil that was provided to me.  I polished off the whole basket myself…I wouldn’t change my decision though. 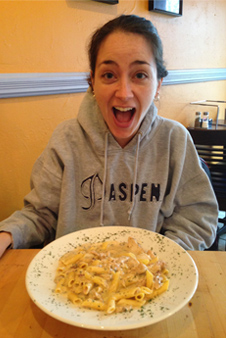 Maybe I Shouldn’t Have Eaten All The Bread? Yikes!

My side salad came, it was a diverse mix of lettuces that were very fresh and crispy (tomatoes and cucumbers were buried underneath) with the balsamic vinaigrette I ordered (all their dressings were house made and gluten free).   I enjoyed it but it was very sweet so I’d probably try their Italian next time.  After I finished off my bread and salad, I was already on the full side but nothing prepared me for the size of my pasta plate.  It was fully loaded with penne, chicken, bacon and fresh sliced mushrooms covered in creamy goodness.  I got through about a third of it before I surrendered and asked for a box.  At which point, not only did I get a box but my attentive waiter also gave me a to-go order of gf garlic bread and the dipping sauce that I couldn’t keep my fork out of after my bread was gone.

Full but having stared at the chocolate case, I decided to pick some to take away with me (which I later confirmed were even creamier than they appeared).  I couldn’t have asked for more from my Giovanni’s gluten free experience in Pittsburgh.  It is no surprise that it has basically been winning awards since opening in 2006.