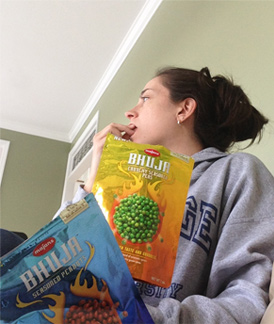 I had never bought food at T.J. Maxx or Marshalls (I don’t really know why as long as you check the dates it isn’t really a big deal) but now I keep checking and checking and checking.  Why?  One day a reflective gold foil package with flames spoke to me and made me buy it…or something close to that.  They were Majans Bhuja Crunchy Seasoned Peas.  I hadn’t discovered an Indian food to dream about in any capacity, but they found a mellow balance in their combination of chillies, tumeric, cumin, coriander and paprika.  I crave these mildly spicy green globes, but they are hard to find, and even harder to find for a sensible price.  I got them at T.J. Maxx for $2.99 and haven’t found them again since.

For that reason, I explored a couple other Majans Bhuja products (they are all gluten free and produced in a dedicated gf facility) that are easier to locate including their Seasoned Peanuts in the light blue pouch and their Nut Mix in the purple pouch.  Neither compare to my peas.  The nut mix, for the right price, is a possibility.  I adored the seasoning of the multigrain noodles, it had some of my beloved peas and a pleasant addition of chickpeas, but it was loaded with cashews which for me is a downside.  As for the peanuts, the spice was so light that you might as well just buy plain ones instead for cheaper.  You may think, oh, I’ve seen them at Whole Foods or something which could be true but at mine, not only have I only seen three of the eight varieties, but they didn’t have the crunchy seasoned peas and they are almost $5 a bag!  I can’t justify that.

I’d like to get my hands on the original mix or cracker mix and maybe one day I will.  For now, I’ll just say that if you see them, buy them!  Whether you eat them or send them to me, if you see a good price then go for it.  If you don’t like them, someone around you will.

Sidenote – According to Wikipedia (which I rarely use as a solid reference) Bhuja mix is the term for an Indian mix in Australia, which is where the company is based, and New Zealand.  It is also known by a number of other names including Punjabi mix or Bombay mix.  I was completely unfamiliar with the term prior to this and thought it was part of the company name originally.  Oops.