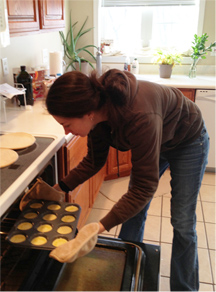 Not sure about you, but when I wake up to -8 degree weather, my inclination is to huddle up in bed in a fort style structure or strategically situate myself next to the portable space heater for the foreseeable future.  After a half hour of the first, I begrudgingly moved onto the second and then decided that the oven could be suiting the same purposes.  Why not try out the gluten free popover recipe I saw recommended in an online group?  Standing around a running oven makes perfect sense today!

What is a popover?  It is an airy, hollow roll much like an English Yorkshire Pudding (this group is UK based) named after its baking over/popping out of the muffin cups.  This American version, like the British one, is made of eggs, flour and milk.  It is treated like a standard roll with butter (often served with gravy in England) or more like a biscuit with condiments like jelly, honey and whipped cream slathered on.  Personally, I think they would make fitting little hand sandwiches! 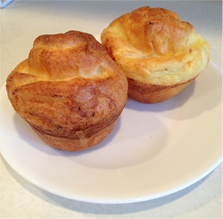 Now, I’m not sure where this recipe started, but as I said, it came suggested.  Various members had already taken a shot at it for the holidays with immense success and I can see why.  It was practically fool proof!  (Practically in that I managed to burn my fingers a couple times.  Oops.)

Heat the oven to 400° F and oil a 12-cup muffin pan.  Mix together the dry ingredients in a large bowl.  Combine the milk, eggs and butter in a blender and blend until smooth.  Pop your muffin pan in the oven for about five minutes, using the time to blend the dry and wet ingredients together.  Take the pan out, and ladle the batter into the oiled cups, about ¼ cup of batter into each cup of the pan. Each one should be about two thirds full (I burned my fingers stabilizing the pan while ladling, so keep in mind that it was in the oven already!).  Bake for 25 minutes, then decrease the oven temperature to 350° and bake an additional 10 minutes or until golden brown.

They Came Out Of The Tin In One Piece! Big Smile!

I’ve never made a popover before, gluten free or otherwise, but I’m glad I tried.  I could see making these again in a heartbeat.  They were soft, chewy, flaky and fluffy all at once, and simple to make.  They even came out of the pan without sticking!  (Yes, I have managed to get things stuck in well oiled tin pans before.  Don’t judge.)  I noted that other recipes are using gluten free all purpose flour, which could make it even easier, but I can’t attest to what differences it may make in flavor or texture (my bigger concern).  I was pretty confident about this one given the triumphs of others, but I am open to alternative versions during future attempts.  Either way, this was a great reason to hang around the stove on a cold day or even on a warm one!