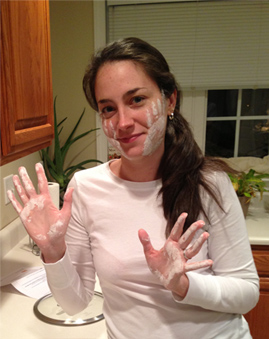 Let’s start with potato flour because the process is simpler.  Seriously?  Am I really discussing flour?… I am for today and if you are here, then at some point you wondered this too!  To create flour, the entire potato, excluding the skin, is cooked and dried.  It is then ground down into powder to make flour.  The flavor is much more potato-y than its counterpart, starch.

Okay, then potato starch is… ?  Just like it sounds, only the starch.  They get it by grinding down raw potatoes into a pulp that is mixed with cold water.  My trusty informant told me it was cold to avoid the gelatinization of the starch (loved that she used the word gelatinization!).  They separate out the pulp, then remove as much water as possible and let the starch dry out to powder.

Want to make this a little harder?  Potato starch flour, as it is sometimes called, is the same as potato starch, not potato flour.

Tapioca starch or flour is made from the cassava/manioc plant root.  It follows the starch style of processing but only after removing toxins.  Think cyanide.  Perhaps that is why they are considered the same in the U.S. (South American and Caribbean countries consider them different but commonly refer to the flour as Cassava flour instead.)?   But I’m not sure how you’d make the flour if the pure product you are to dry and pulverize is poisonous?  Or because tapioca is considered the starch, calling it starch is redundant, so they say flour, as in flour of the starch?  Anyway, long story short… 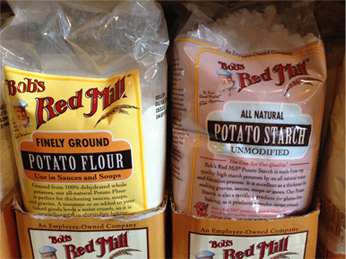