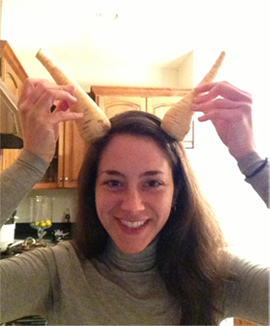 Parsnips Aren’t Intimidating And Neither Am I, February 7, 2014

First Fresh Friday of February!  Up this week?  Parsnips!  I don’t have any logic behind why I chose them, other than I went to Soergel’s Orchards Market in Wexford a few days prior and decided they didn’t look too intimidating.  How hard can a dirty white carrot-looking vegetable be?  I picked up four…just in case I messed up…

I know how strange this will sound, but despite them so closely resembling a carrot, I actually thought they weren’t sweet for some reason.  I believed they tasted closer to a mild radish, but sure enough, they’re sweet.  Not as sugary as a carrot but undeniably similar in flavor.  If I wasn’t looking at it and popped a piece in my mouth, I would have guessed it was a carrot.  Aside from not being as sweet, it also had a woodier center.  For this reason, they are not typically eaten raw, although they are safe to consume that way if you’d like.

Since I try to keep these new veggies accessible, I decided that roasting them would serve the parsnips well.  They should caramelize a touch in the oven, giving me a sweet side without added sugar.

Wash off the parsnips, peel them, then cut off the tops and bottoms.  Chop them into large pieces about an inch in size (yes, I know the shape doesn’t make this completely even).  Place them on a baking sheet and drizzle oil over the parsnips.  Toss them around with your hands so they are evenly coated.  Sprinkle salt and pepper on them.  Pop in a 425° F oven for 25 minutes or until golden brown, stirring halfway through. 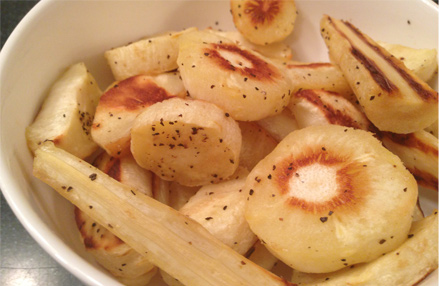 Were they appetizing?  Yes.  Would I make them again?  Yes.  The catch?  I’m not a big fan of sweet vegetables (probably shouldn’t have caramelized them then is what you are thinking now but I assumed it would be the most likable approach for anyone else).  They were simple and smelled a lot like kettle corn when they came out of the oven, but not something I would put in my regular rotation.  Anyone who likes cooked carrots (I stick to raw) would absolutely adore them.  I just prefer a more watery, less candy-like vegetable aside from the occasional sweet potato.  Still a thumbs up though considering I finished them off!