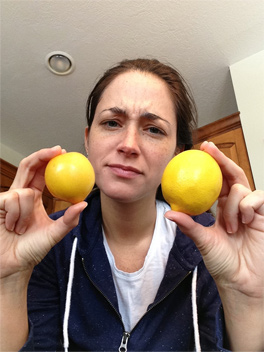 After last week’s Fresh Friday jicama hell, I headed back to fruit this week.  I figured three attempts last week earned me a quick week so I took it easy on myself.  No need to get frustrated a second week in a row, is there?  As I wandered the rows, my eyes locked onto a ledge blazing sunshine yellow.  Its contents were too small to be grapefruit, too smooth to lemons and definitely not banana shaped.  So what are they?  I made a beeline to the display and discovered…lemon plums or Lamoon plums. 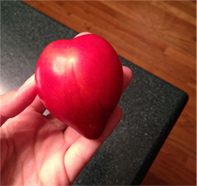 Shaped and colored like a lemon before aging, but skin and flesh of a plum.  While ripening they deepen to an orange-red color, but many say that the tangy citrus flavor is more prevalent while it is still in the golden stages.  My lemon plums were from Chile, and none are grown in the U.S., however, after further reading it seems that they began in Israel with the Ben Dor Company.  These creations are also referred to as a Lamoon plum or Lamoon fruit and are only available for a few weeks in February or March.  Take note, because if you find them, you can’t really wait for another day to try them.  Don’t miss the chance!