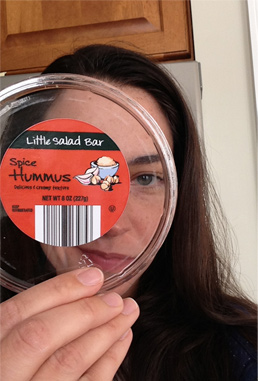 I found a new favorite hummus! Little Salad Bar Spice Hummus.  Three solid pros?  First, it is cheaper than most (And on a special this week too!).  Second, it is from Aldi so it is clearly labeled gluten free.  Third, I didn’t have to make it!  Con?  It lasted less than 24 hours around me.

My location sold three varieties including spice, vegetable and cayenne.  I’m not one for very hot or peppery foods so I passed on the cayenne that has a relatively deep red color.  The vegetable just seemed like it could be bland so I flipped over the last one to determine what they deemed spice.  Roasted garlic, jalapeno, coriander, cumin, salt and black pepper made the list.  That’s for me.

After arriving home, I cracked open the container and my bag of Clancy’s tortilla chips (don’t judge, I know that isn’t prime hummus dipping but I like it) and took a big scoop.  Before it hit my mouth, I could smell the garlic wafting from the plastic bowl.  It was creamier than most, wasn’t overly spiced and I found that my usual handful of dips wasn’t enough.  If you want to add your own touch, it could be used as a base to add onto.  For example, you could give it a kick with some Tabasco or stir in some pesto if that’s your thing.  I finished mine off plain, but to each his own.  If you want to impress people, dump a couple of these in a bowl and try to pass it off as homemade.  No, I didn’t try that but you could!