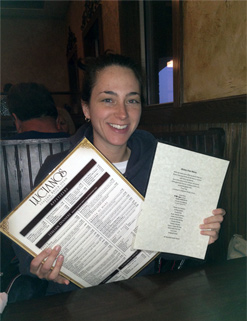 Shouldn’t Their GF Menu Be Out Of This World? They Are In Mars Afterall!, February 10, 2014

My parents are back from their tropical vacation (a bit jealous since I’ve had to shovel out numerous times this week) and we went to dinner.  Where?  Luciano’s Italian Brick Oven in Mars, PA.  Why?  Mainly because pizza is my dad’s favorite food but it’s also close to their house, they were exhausted from traveling and they have a gluten free menu I hadn’t tried.  I’d heard positive things about their gf pizza, not only from my parents but through online reviews as well, and I’ve been looking to give it a whirl.

This was not my first trip there, but it was the first time in a number of years and the first time since going gf.  I already knew I was going to try their pizza tonight, but I did take a few minutes to see what all was on the gf menu and compare it to the descriptions in their regular menu.  This is an issue at most places that I wish they’d adjust, but still thankful that it existed at all!

The small gluten free cheese pizza looked appealing with plenty of melted mozzarella, a proper ratio of tomato sauce and a gold crust, but I just wasn’t into it.  The crust was slightly sweet which I enjoy and the outer crust was relatively crispy in a pleasant way, but the center was a touch soggy and overall taste just didn’t mesh to me.  But I was hungry and polished off half of that pizza plus a few of the end crusts my mom discarded… 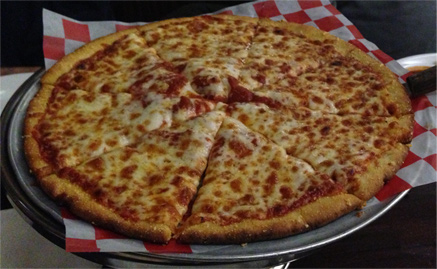 In all fairness, I have never been a huge pizza fan.  I wasn’t the child that begged for it, as a matter of fact, I tried to avoid it every week for years but eventually gave in and found some I notice myself occasionally craving .  That said, I have had a number of gf pizzas that I’ve preferred and for an upcharge of $4.50 on a small pizza (which used to be $3.50), I can’t justify the cost for that particular product.  I know I’ll be going again at some point because of my family, but I think I’d opt for a salad next time or maybe try a specialty that isn’t seen at other places such as chicken piccata?  Who knows.  Either way, I’m glad I tried Luciano’s Brick Oven because for one, I’m always eager for a new gf experience, and two, it checks another Pittsburgh gluten free restaurant off my list!  Plus…I didn’t get glutened!  I never take that for granted. 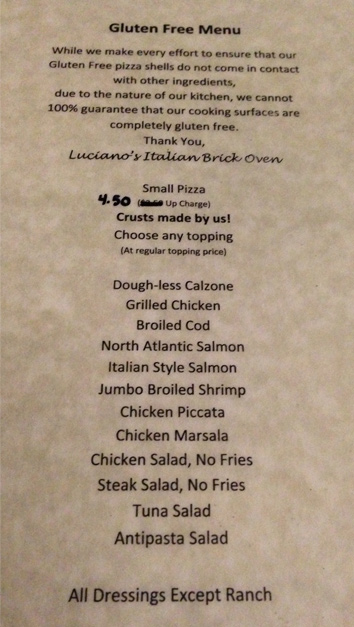 Update:  I tried Luciano’s again.  Read about that experience here.