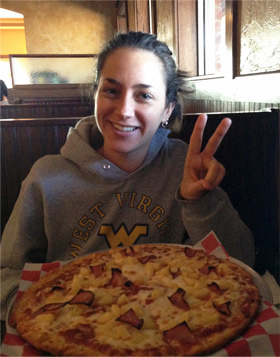 Take two…another try at the gluten free pizza at Luciano’s Italian Brick Oven in Mars.  While it still doesn’t top my list, I liked it far better this time around.  Rather than ordering a plain cheese pizza, this time we went for the Hawaiian with pineapple and ham.  The center was still on the soft side, but the sweetness of the crust that I referred to in my prior post was much more harmonious with these toppings and I wasn’t the only person with that opinion.

The price is still high, and even higher when you start adding toppings, but it was an improved experience.  I also learned a tad more about their gf crust history from the waitress.  Apparently they used to order from Gluuteny until a new chef came in and worked out his own recipe which is what is currently in play.  For clarification purposes, I have only eaten the second version as the switch was made before my prior visit.  No opinion yet on Gluuteny’s gf pizza crust!