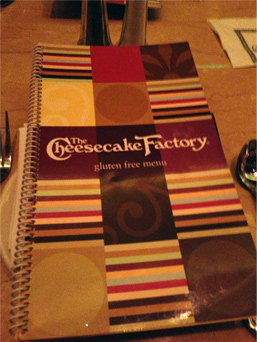 I went to my first MeetUp!  Yes, this anti-social, gluten free gal went and ate with more than 20  strangers who abide by the same diet and lifestyle.  Was I nervous? Yep, very much so, but I did it anyway.  And it was worth it!  I’m glad I went!  While in most cases, I’d sit here and talk about the new gluten free menu at The Cheesecake Factory that I waited so long for, this time I’m going to talk about what it was like mentally for me and what all I learned in my over two hours of interaction.

Not knowing what to expect, I went in and asked the hostess where the gluten free group was (a reservation of 25 is memorable) and she knew that some were in the bar, but had no idea who.  So I wandered over to the bar, asked the bartender and she pointed me in two directions because two sets of people had inquired about gf options.  Well, narrowing it down at least.  I went towards the larger group, spotted a plate of nachos and lack of beer, and asked if they were part of the group.  Luckily, they were.  Okay, calm down a little now, you’ve at least found some people, including an organizer.  At that point, we moved to the two long tables that were set up for us, and I took a seat towards an end, in a chair rather than the booth.  I like to know I can escape without crawling over people, particularly strangers if I don’t feel well.  Yes, every decision I make somehow relates to this lifestyle and past issues.  My habits have all been designed around getting sick for so long that I’m having trouble breaking them.  Anyway…

I was stunned to see that there is an entire gf menu, rather than simply a gluten free list like most places and didn’t know what to try.  I was already anxious about being out, let alone with strangers, then add on eating, and even more so eating at a place that I hadn’t had since I went gluten free.  It added up to sweaty hands and I feel like I turned Rudolph-nose red (don’t know for sure), but I wasn’t turning back.  Everyone had been very welcoming, and I didn’t feel like a doorknob, just sitting there and not interacting.  I decided I was going to get something out of this, and it would be healthy for me to participate.

Once I started to calm down, I took the opportunity to learn.  I asked about traveling, particularly traveling abroad since my trip to Germany had a bad turn and the folks near me were quite worldly (was directed to a nice little app called GF Travel/Cards by GlutenFree Passport that has allergy translation cards that you can show waiters and such when you have a language barrier), heard about peoples’ different paths to being diagnosed, restaurants they frequent, ones they avoid because they’ve been glutened and cats…it was just nice.  I was around people who knew what it was like and it showed. 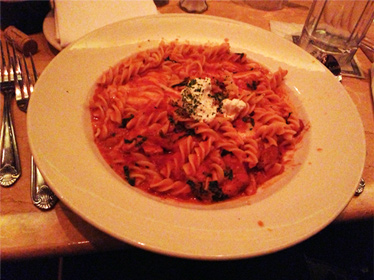 When I was reflecting on my way home, I realized that… I didn’t feel like a burden…I was okay with talking about more personal things because I wasn’t feeling like I could possibly get that look or that I’d get talked about later…I didn’t feel like I was being judged for being afraid of my food when it arrived, nor pushed to eat if I wasn’t comfortable with it (in fact, a couple people offered to try my food first because they have quick reactions to test it for me which may be odd to many but I found incredibly kind and understanding)…I wasn’t the only person who asks questions like “is there a designated fryer”… if I had to leave the table it was okay because it has happened to everyone there…I’m not the only one who has eaten nothing at weddings or social events because there was literally nothing they could eat…

I’m not whining or complaining before anyone says anything.  I’m simply telling you how I feel.  Plenty of people have far more serious health issues and most of the time I can keep that in perspective, but there are times I get weighed down.  It can feel suffocating and when I realize that I’ve only just started doing this, I have trouble imagining keeping it up for the rest of my life.  These people, who have been at it far longer than I have, made it less lonely and pointed out that it’s getting easier now.  Which I agree.  I’ve seen a transition even in the past year or so with gf accessibility.   No matter what, I feel better and am living freer so it is worth it.  Sometimes it just feels hard to please everyone?

Thanks to everyone there tonight and especially the ones in my immediate vicinity who were so pleasant, open and talkative.

And just for the record, The Cheesecake Factory gf menu probably took a while because they were busy nailing it.  They didn’t just take the easy way out and determine what was gluten free, which was basically nothing before, but decided to bring in gluten free pasta and buns, so the menu (aside from the desserts ironically enough) was surprisingly large and diverse.  I had the Four Cheese Pasta with Chicken and a piece of their Godiva Chocolate Cheesecake.  I had lots of leftovers.

Another random piece of information I picked up tonight?  Buffet scrambled eggs have wheat in them.  It is what keeps them fluffy and stops them from being in a puddle of liquid that no one would touch.  I didn’t know that. Did you? 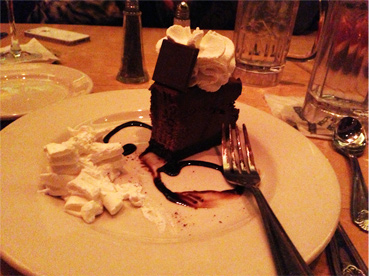