I had an interesting failure today that luckily did not land me in the glorious land of glutened.  I have been compiling a list of gluten free restaurants in Pittsburgh from a variety of sources and experiences.  One of the online directories cited a place that I’m familiar with, a local Mexican restaurant that has a location nearby.  It is listed as having a gluten free menu, so I gave them a call (prior to today) to confirm.  I got a cheerful, positive response that they did in fact have a gf menu available and I hung up.  Excitedly, it got added to my list of places that I needed to try again now. 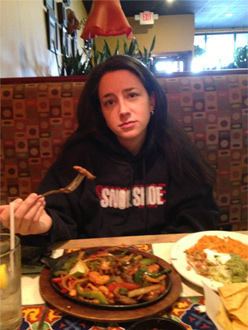 I went to the place (whose name I am leaving out on purpose, even though I’d love to tell you) for lunch and asked for the gluten free menu while being seated.  He said that they didn’t have one and I actually thought he was joking.  You know, because I had already called, asked, and got confirmation that there was before going!  This is where I need a little work.  I should have just left because my information was incorrect and not risk it.  I almost never risk it but I wasn’t comfortable with just leaving.  I really need to work on that…

I ordered some fajitas with corn tortillas and hoped for the best.  I skipped the beans because the safer option was even cooked with bacon and sausage, and well, not all of either are safe.  Lots of sausages aren’t gf and some bacons aren’t either.  The fajitas really looked good and smelled good, lots of red peppers, green peppers, onions, chicken, shrimp, steak…very tasty but anxiety inducing.  I started out eating them slowly to see if I’d have that initial, “ouch that hurts” reaction prior to the “I’m about to be in trouble” situation.  I seemed okay, plowed through the rest and got out of there, just in case.

For me, I seem to be okay.  My reactions are typically within twenty minutes but it wasn’t worth it.  I wrote an email to the restaurant asking if they had a gf menu before and removed it, explaining my problem today and a few other things.  I’m curious because this just shouldn’t happen.  Ever.  This place will obviously not be included on my list and I am considering trying to have it removed from where I had seen it originally listed.

Despite managing to get away unscathed today, I will be bailing on any place that gives me incorrect information in the future.