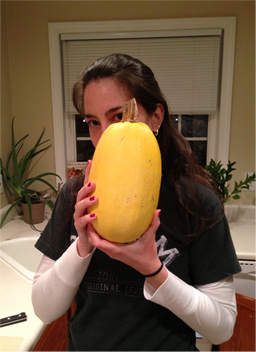 Yesterday, I tackled one of my New Year’s suggestions by hunting down a gluten free event, and today, I didn’t see a reason not to try another one.  This time, I decided to try working with a vegetable that I am not familiar with, spaghetti squash.

Have I eaten it before?  Yes, once.  Have I prepared it before?  Nope.  That’s the catch, well, and that I wasn’t a big fan of it during round one.  Sometime during high school, I recall my mom using it to replace pasta and topping it with marinara sauce.  Umm, no.  It just didn’t work for me, or my dad either, so it didn’t happen again.  Don’t get me wrong, I love vegetables, probably far more than most, but I liked my classic pasta as is and didn’t want it screwed with.  Looking back, I probably should have been more open to it, especially since it was harder and more time consuming to make the squash over the noodles.  Anyway, I realize that there are lots of wonderful gluten free pasta options available, but this is a healthier option and who says it has to be used in place of pasta? 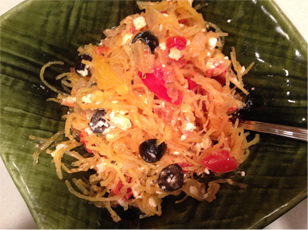 To start off my mission, I hit the internet as I often do for recipes.  I knew that they were commonly used in a boat form (halved and loaded up with fillings), but I decided not to stray too far from the norm.  Rather than something reminiscent of a classic bowl of spaghetti, I went after one closer to the style of a pasta salad.  On the first page of results, this Spaghetti Squash I recipe jumped at me.  Four and a half stars and over 1,200 reviews.  Sounds like that could be just what I’m looking for. 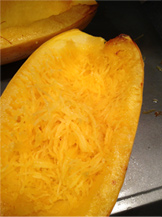 Or not.  I gave it a try.  And I had a lot of success with cooking the spaghetti squash.  I baked it for longer than the recipe called for after noting a lot of people wanted it less crunchy, and it came out easily and stringy.  I mixed it with the cooked onions, garlic and fresh tomatoes, as well as the cold feta, black olives and basil.  It was good but not something I would go out of my way to make.  I think that being a full-fledged meat eater is more to blame than the actual flavor or texture of this dish.  I’d give it three and a half stars? (Maybe I should add bacon?)  Final verdict – I’m interested in using this veggie again in the future, but in a different way.

On the brighter side, not wanting to waste anything, I took advantage of the seeds too.  I roasted them down like pumpkin seeds on Halloween, which made for a delightful little snack! 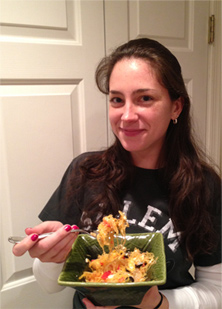 Not Bad But Not My Favorite, I Tried