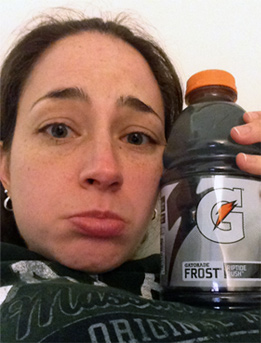 Even though the heat has retreated, sports drinks are still in the spotlight.  Between keeping up on your New Year’s Resolution to exercise, fighting off an illness or simply watching football commercials for the stuff, you’ve probably had one recently.  I’m not saying that they are better than water for any of those situations (since this is a highly debated subject), but they are a typical choice, including for me.  I’ve been sick loads just from not knowing my issue was with wheat, rye and barley, and Gatorade was my first choice to rehydrate for years.  Now that I know, I need to ask…Is my Gatorade gluten free?  Better yet, which sports drinks are gluten free?

**I checked these company pages in January 2014.  They only apply to US versions of the products.**

According to PepsiCo’s site, Gatorade Thirst Quencher, G2 and Gatorade Endurance Formula drinks are all gluten free.  As for Propel, they do not test it, but point out that none of the ingredients are derived from grain or flours that have been linked to gluten sensitivity.

According to Coca-Cola’s site, Powerade and Powerade Zero with ION4 drinks are all gluten free.  NOS energy drinks are also on the list.

According to the Clif Bar site, CLIF SHOT Electrolyte Replacement drink is not gluten free.

According to Pacific Health Labs’ site, Accelerade All Natural Protein-Powered Sports drinks and all their powder products do not contain wheat or gluten ingredients, however, they are manufactured in a facility that processes wheat (among other things) and therefore do not claim to be gluten free.  They warn it could be an issue for sensitive people despite the facility being cleaned between production runs.

According to an e-mail response from R.W. Knudsen Family, Recharge sports drink “does not contain ingredients derived from gluten. However, it does not meet the U.S. Food and Drug Administration’s established criteria for a gluten-free claim”.

While it is easy to assume that drinks are gluten free, you also need to consider that some aren’t.  Frustrating?  Yep, but between the insane number of flavors available between Gatorade and Powerade, the fact that it is readily available and that there is no extra cost like for most gf products, I have no complaints!  Oh yeah, and plain water always works too…