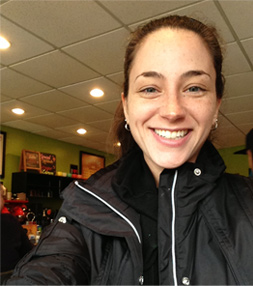 Trying to switch off places I eat, I jumped at the invite for a Saturday lunch with a friend of a friend.  She and I are going to be in a wedding together in August, and since we are the only two in the area, it made sense to discuss some bachelorette party type planning.  Since I do need a gf friendly restaurant and she lives near the city, we agreed on Square Cafe in Edgewood.  She hadn’t gone in years, and I wanted to write about it.  I had been there towards the end of last year, with the soon-to-be bride and her fiancé prior to blogging and loved the icon labeling on their menu (they also mark vegan and vegetarian) not to mention the vibrant retro decor.  So that’s where we went.

I arrived early as I always do, but rather than my typical ten minutes, I was around forty.  What can I say?  When going to an area I’m not as familiar with, know doesn’t have ample parking, and not sure what’s going on with Pittsburgh’s crazy construction schedules, it happens.  A lot.  Just as last time, there was a line that was about 30 minutes long to get in there, but that happens on Saturday mornings during breakfast.  The timing actually worked out well for us because of it.  Anyway…

Last time I was torn between three menu items.  The Gluten Free Pancakes, the Cornmeal Pancakes and the Brussels Sprout Hash.  Since I gave up on making myself pancakes a while ago, I narrowed it down to those two and then inquired with the waitress about which she’d pick.  Hands down she went for the gf flapjacks.  Her answer was so quick and definite that I didn’t give it another thought.  They came with a pile of toasty caramel apples, thick whipped cream, a butter ball, snowed on with powdered sugar and a side of maple syrup.  Those three substantial pancakes mocked me.  They knew I couldn’t finish them but I tried and only got through one.  The outside was nice and hard while the inside was still fluffy.  I adored them and they were why I wanted to dine there again. 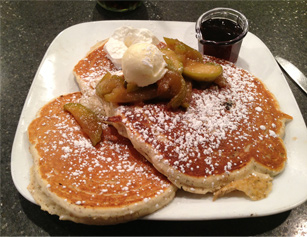 This time I ordered the Brussels Sprout Hash.  I should point out again, as I did in the Tamari post, that I like them!   Especially with bacon!  When reading reviews prior to my first visit, I had seen numerous posts about this dish which is why I was so interested.   I took the leap this time.  While it didn’t have bacon, it did have pancetta which worked well too.  Stacked on top of a mound of cheesy grits were my undercooked sprouts, mushrooms, braised leeks and nicely runny centered, over easy eggs.  I like the idea and I’m a grits girl, but this didn’t work for me.  I think the Brussels just needed cooked far longer than they were so they wouldn’t be so harsh.  Or maybe chopped up smaller and cooked for the same amount of time?  I ate all of my yummy grits and toppings, but left some egg and most of my sprouts.  I’m glad I tried it because I’d still be wondering otherwise, but I’ll stick to the pancakes in the future.  Or maybe not.  They do seasonal menus so I’m interested to see what the warm weather brings! 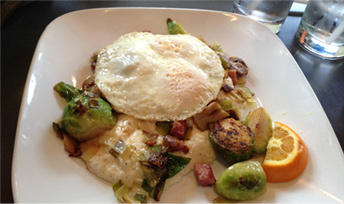