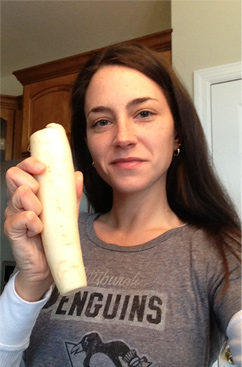 March’s first Fresh Friday is all about the Daikon radish.  When you hear the word radish, you likely envision a bite sized red ball with a rat tail and hot white center.  That’s not this one.  This one is fittingly called a white radish or mooli.  It is a long cylindrical root that is snowy white inside and out.  Without a doubt, it could be confused with a parsnip to a first time buyer, so note that the daikon’s skin is smoother, lighter and softer because of its water content.

Daikon is typically used in Japanese cuisine, raw, cooked and pickled.  Some researchers believe that the vegetable has cancer blocking properties, helps the liver process toxins and is a digestive aid among other things.  If you don’t cook Japanese food at home, then it can be used in the same ways you’d use a normal red radish (and others would say like a carrot too).  It can be cut up in salad, sliced to use with dip on a veggie platter or tossed in a stir fry.  The taste is comparable, although slightly more mild.  I’ve used it in salads and for dips and snacking in the past, so I wanted to try something else.

After seeing a recipe for pickling daikon and carrot, I decided it was a departure I could handle.  Literally, daikon, carrot, sugar, vinegar, water and salt.  Hopefully it works.  I also spoke with a lovely woman who does a sweeter version with carrots and parsnips (of all things) that could be worth a try.  Mine is currently sitting in the fridge, waiting to be tried eventually.  I will not be posting a recipe or proportions until I decide if I like it or not.  Until then… 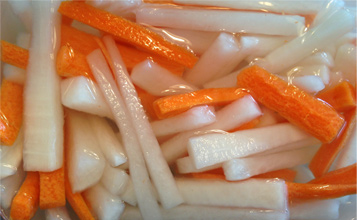