This trip was my first time to Disney World since realizing I needed to follow a very strict gluten free diet.  By strict, I do mean that I’ll normally notice if a seasoning on my food is wrong because within twenty minutes I’ll be so sick that I can’t function for the rest of the day and be off for days after.  I realize many of you do not have such extreme reactions but this is why I am very cautious.  That said, fast food is something I typically stay away from since it is easy to get nailed with cross contamination or a lackadaisical worker who doesn’t realize how much harm they could cause.

When entering EPCOT I took my past attitude of I’ll stop to sit down and eat when I’m hungry.  I just don’t like the idea of planning my times and rides around a set meal time, as I feel that it detracts from the carefree fun.  Needless to say, that came back to bite me.  I would highly advise you to make reservations for dining there anymore. 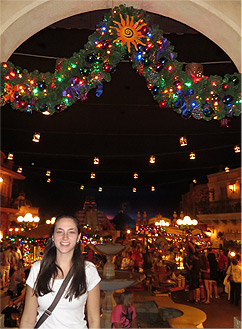 EPCOT Mexico Prior To The Reservation Issues, December 2013

I used the gluten free Disney dining app to peek through the countries and see which would be easy to handle.  The San Angel Inn in Mexico topped my list since it had been a tradition I had with my mom when I was little, and the Coral Reef Restaurant in Future World seemed full of gf options compared to the others.  I stopped into San Angel Inn around 1:30 in the afternoon.  I was told they weren’t taking walk-ins but were starting to at 2.  Okay then.  I popped over to the Maelstrom next door in Norway, came back and found out that nope, they aren’t taking walk-ins.  I learned that you can’t make a reservation at the desk.  You had to call the dining reservations number.  Are we serious?  No reservations at the desk at all?  Why did you tell me you were taking walk-ins at 2 then?!  Grrrrrrrrrrrrrrrrrr.  Called the reservations line only to find out that there are no openings at Mexico at all but Coral Reef had one at 6:15.  Okay.  Book it.  Whoops!  Glitch, that one isn’t available anymore the dining reservation person says.  Earliest is now 9:15, so about 7 hours away and we’d miss the Illuminations display.  No thanks.  We are going to venture into EPCOT fast food…

Skip to here if you only want to hear about the gluten free Electric Umbrella dining experience! –

Most of you probably don’t have this problem anymore, but I have an issue with feeling like I’m inconveniencing people when it comes to making special requests with my food despite knowing what will happen.  It was something I had to deal with head on at the Electric Umbrella in EPCOT.  After having read some reviews about their options, I walked in.  Immediately, I was handed a menu by a man designated to keep the lines rolling and I asked about gluten free items.  I figured before I was actually in a line and holding people up that maybe he would have a separate menu or give me a heads up on the process.  Nope.  He was lost and filtered me into a line.  Alright then.  I get up to the cashier (deep breath), let her know I’m gluten free and ask her to point me in the right direction on what to order.  She smiles and in a friendly manner says, “I’ll notify the manager.”  In the blink of an eye, all I can do is sympathize with the people stuck in line behind me (each cashier rings up two lines, one walking up to either side of her).  I was lucky that they weren’t the huffy, irritated looking type but I still feel badly.  I can’t help it.  It’s just who I am.  She asked if she could ring up the people on her opposing side line, and I was relieved to have her move on from me at the moment.

By the time she is done with them, there is a manager standing behind her with a binder in hand.  She directed him to me, he smiled and asked my allergy, which he marked on a bright yellow allergy alert notepad.  Next thing I know, the binder is open and he is flipping through all the gluten free food options available.  I think I started breathing again around this point?  I could be wrong.  Each page showed a picture of the box so I could see it, as well as a list of every ingredient.  Chicken tenders and fries?  Ummm, yes please.  I haven’t had chicken tenders in ages since I don’t fry foods at home.  I am informed that he will personally be making my food as well as delivering it to me and he disappears into the back. 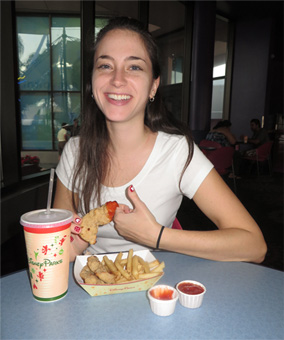 GF Chicken Tenders and Fries at the Electric Umbrella Deserved a Thumbs Up, December 2013

About ten minutes later, he arrives and despite knowing that everything is okay, I’m anxiety ridden but trying to lightly smile through it.  After picking at some fries at the counter, which are nicely crispy, I take a seat and decide to dig in.  After downing a basketful of fried amazingness, panic sets in.  Luckily, I’m already texting with my mom about the five inches of snow she and my dad were contending with while I soaked in some sun.  She gives me a call, I go through my concerns and then she proceeds to list off a number of reasons why Disney would do everything they can to not accidentally gluten their gf park goers.  Her logic makes a lot of sense and I let it set in but still decide to sit at the table for about a half hour to confirm that I still feel okay.  Reflecting now, it couldn’t have been a much better experience for me.  I got to eat a food I love that tasted like bliss to me, I was forced to face my fast food fear as well as my discomfort feeling like I’m inconveniencing people, and I didn’t get sick!  I couldn’t have asked for more, and hopefully positive occurrences like this one will help me calm down in the future.