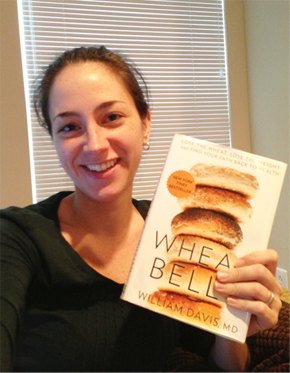 Me and My Life-Altering Copy of Wheat Belly

This morning I woke up to an email from a friend of over 15 years.  She has been having some issues and after a hardcore wheat-filled binge, she realized it is possible that it could be the culprit.  Since I live the gluten free lifestyle, she wanted some information on where to start.  I’ve included my advice to her below.  I am posting it because I thought it could be a good place to start for those interested in learning a few basics.

I talk almost every day to people with either celiac disease or gluten intolerance (which is what I have), so my advice is a combination of personal experience, the experiences of others, and hundreds of hours of reading.  I’m going to word all of this as simply as possible…

1.  I would advise against going gluten free until you’ve been tested for celiac.  If you take it out of your diet and get tested later, it won’t work.  It is better to know which you are dealing with overall, even though the treatment is the same.  You can come back negative for celiac but still have problems with wheat/gluten.  That is what ended up happening to me.  I had tested negative and let it go until I read that it could still be causing my stomach issues.  (Damn the doctors for not saying that to me and never trying to remove it from my diet!)  Anyway, there are a lot of people who don’t test first, go gluten free, and then have to actually eat regularly again for weeks or months (and put themselves through hell) just to get tested later.

2.  What is the difference between wheat and gluten?  Wheat is wheat just like you are picturing in your head.  Wheat has a protein complex in it called gluten.  It is what makes your soft, white bread chewy.  Gluten is also in rye and barley.  So being gluten free is removing wheat, rye and barley products.  Oats are technically gluten free but can make a lot of people sick because they are normally grown and harvested near wheat, so they get contaminated.

3.  What is the difference between celiac disease and gluten intolerance/sensitivity?  Simply put, celiac is an autoimmune disorder where the body is hurting itself and an intolerance isn’t.  Celiacs have damage to the villi in their intestines, which causes them to not be able to absorb the nutrients going into them.  You could view intolerance as more of an allergic reaction almost?  (Mine wasn’t absorbing simply because of how fast everything was passing through me.  Everyone has different reactions/symptoms/severity/time frames in which things happen.)

4.  If you decide to go gluten free before testing (wouldn’t judge at all) just to see what happens, then do it cold turkey and fully.  You won’t really figure out if it is your problem if you keep having little cheats here and there.  That means no cookie nibbling or beer sip at all.  Sounds harsh but you won’t get the night/day change staring at you in the face if it is your issue.  I gave myself a set 2 weeks when I started and haven’t been back (but noticed a difference within week one).  Two to three weeks is a common suggested amount of time among the community (not necessarily medical advice) though to see what happens.  It sounds like a lot, but you have to think about the grand scheme.

5.  What to eat?  If you try this, I’d say clean eat through your time.  Fighting with labels and hidden gluten is a lot to handle, especially if you are just testing it out for a few weeks.  (Although you are more than welcome to call me and ask about products or text me labels to look at if you want to.)  It would be a matter of sticking to things like meat, eggs, cheese, veggies and fruits.  Back to the basics.  If you want alcohol, hit wine instead.  If you are going out to eat during that time frame, you can always ask me.  Fair warning, restaurant fries are not allowed because they use the same fryers for breaded items, which counts as nibbling.

6.  Foods to watch out for aside from obvious things like pasta?  Be careful of salad dressings, bouillon and canned soups.  Almost all soy sauce and teriyaki sauce is also a no-no.

Along with this quick cheat sheet, I decided to drop off a printout of this simple gluten free diet list, a packet I received at a local gf introductory class, as well as a copy of the book that changed how I live, Wheat Belly by Dr. William Davis.  I recommend it to anyone and everyone who asks me about being gluten free.  It is a little dry but highly informative in every way about wheat, why so many of us have issues with it, what health issues people are having and how to go about fixing them.