If you’ve read my experience about gluten free dining in EPCOT’s Electric Umbrella then you may remember that my mom and I had a few traditions at Disney.  The first was a late lunch at San Angel Inn in Mexico and the second was a French pastry to get me through the evening fireworks.  Given that pastries are basically off my list, I decided to still try to find a treat in France, semi-salvaging the ritual.  Since sorbets and ice creams can often be gluten free, I decided to pop into the L’Artisan des Glaces Ice Cream and Sorbet Shop that opened in the summer of 2013. 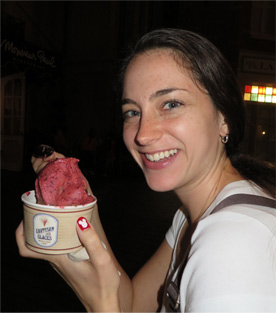 As I entered the waffle cone scented location, I took a quick look at the list of 16 flavors and knew that a few, such as profiterole (think cream puff), were automatically not options for me.  I decided to ask the young French lady behind the counter if any were okay for gluten free diets.  Off the top of her head, she started listing off the few I couldn’t have (and obviously that cones were off limits)!  That’s the way to give this customer a little confidence in ordering!  I opted for a double scoop cup with mixed berries sorbet and chocolate ice cream to create a truffle-esque taste, but my amusement didn’t end there.  As soon as she had answered me, another girl working there asked her something in French and a discussion between them ensued.  Now I have no clue what was said and honestly it doesn’t matter to me either way, but I can only imagine.  In truth, I’d assume that she was explaining what I was asking about, but considering I just asked about gluten free foods in the land of baguettes, it could have been anything.   Feel free to take guesses at what jokes could have been made!