My experiences with gluten free dining at The Walt Disney World Swan and Dolphin Resort in Orlando were easy.  There were a number of options available between the two, but since I was staying at the Dolphin this trip, I stuck to that side for pure convenience. 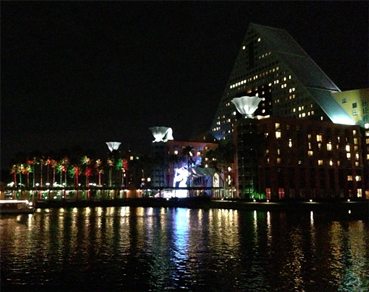 Up first, the Picabu because I liked it enough to go back for more!  I originally ended up here because I eat on a strange schedule, with my dinner time often falling later than most places are open.  They consider it a “buffeteria” and it happens to be open 24 hours a day, which works out nicely for me.  When I first entered, the board said to inquire about gluten free options with the chef.  Okay.  It was late-night so I wandered over, told him that the board sent me, and asked him to point me in the direction of foods I could eat.  While they had a variety of salads and such, I was hoping for something warm after a rather chilly night at Mickey’s Very Merry Christmas Party.  Not a problem.  He pointed out some roasted chicken, a couple sides and informed me that I could also eat some things from the Taqueria.  Score!  We shifted down to that window and I asked what I could have.  He gave me a big smile, stepped away for a few seconds, and came back with an allergen list for me to look at that clearly labeled everything.  In the end, I walked away with a “bowl” which is basically a burrito without the shell.  I got to pick my meat and toppings, which led me to an incredibly sizable portion of rice, skirt steak, shredded cheese, sour cream and pico de gallo that I took up to my room to scarf down.  It was a great deal (especially given prices around Disney), enough food to stuff me and incredibly flavorful.  I was pleasantly surprised and opted to come back for the exact same thing two days later!  I wish I had a picture of it!

Now we jump to the opposite end of the spectrum, Todd English’s Bluezoo.  This is a more upscale seafood restaurant with prices to match.  Before being seated, I confirmed with the hostess that there were a number of gluten free dishes available and she reassuringly agreed.  She was right.  When the server came to the table, per my usual, I informed him that I was gluten free and asked him to point out a few of my options.  I found out that at least half of the menu was safe, and if I wanted something else, they were likely able to accommodate me.  The bread basket arrived to the table a few minutes later, and I was amazed to see a few slices of gluten free bread heading my way on a separate plate, too.  Yay!  Now it wasn’t amazing gf bread, that’s very hard to find, but it was really decent when loaded up with their fennel butter.  It helped ease the stomach growling until I could dive into my dirty south swordfish with risotto, rock shrimp and littleneck clams.  I was impressed with my food and would have gladly eaten more of it, but in general, I’m more of a Picabu type girl.  I would definitely recommend it for people who strive for more upscale dining.  Everyone was gracious and I couldn’t have asked for better service.