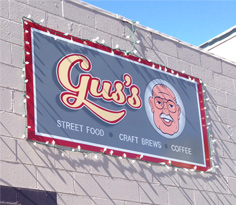 I went to my second MeetUp today!  I was so pleased with my first outing at The Cheesecake Factory that I signed up for another.  After having done the first one alone to test out the waters and force myself to talk to strangers, I asked my newly gluten free friend if she’d like to attend this one.  And she did!  I drove over to her house this spring like Saturday afternoon and we embarked on our expedition.  With me having no clue as to where I was headed (just towards Pittsburgh), I happily took on the role of passenger to an area educated driver. 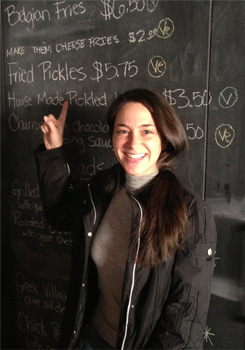 Today we were testing out the gluten free menu at Gus’s Cafe in Lawrenceville (4717 Butler Street).  Or should I say, the menu?  The whole menu is gf!  The kitchen is gf!  They sell beer but all of their food is safe!  This hole in the wall, bar style joint caught me off guard in so many ways.  First thing I noticed was that their menu is written on a chalkboard painted wall in the back broken up by a large beer cooler.  Second thing was upon inspection of said wall, was the array of choices.  Fried pickles, churros, Eggs Benedict, pierogies?!  This was not your usual salad and bunless burger place.  For vegans or vegetarians, they clearly indicate if a menu item meets either of those requirements as well.  Luckily for this trip, I had my friend with me so we got to try even more stuff by splitting things! 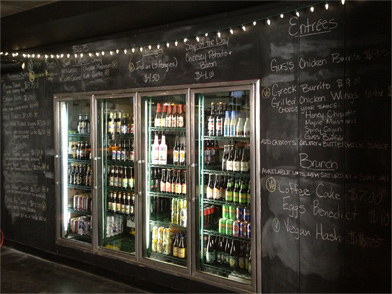 Fried Pickles – The quarter dill pickle spears were done in a thick tempura like batter.  They were pretty good, maybe because I’m partial to fried foods when I finally have the opportunity to indulge in them but honestly, they were my least favorite food of the day.  Which speaks for itself.   I think the batter to pickle ratio was a bit off but still crunchy on the outside and briny on the inside.   The sauce reminded me of a Southwestern tartar sauce but I don’t know what was in it.  Sounds strange and it was, but not in a bad way.   B- 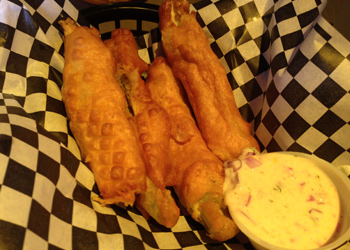 Coffee Cake – It was a slab of soft, cinnamon swirled goodness with crumble topping.  My friend and I were both blown away, not only by the taste, texture and size, but also the Greek yogurt dip that was served with it.  The texture seemed reminded me of whipping cream into butter, somewhere between the two stages.  It was seasoned with cinnamon, sugar and the waitress seemed to believe cloves as well.  You got a lot for your money and tops my list of gluten free baked goods that I’ve ever eaten.   I’d drop in just to get a piece to go if I was in the area.   A+ 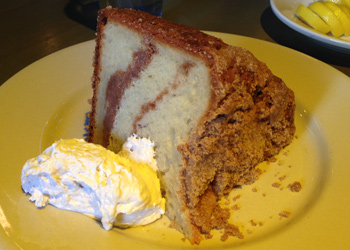 Eggs Benedict – One of the first questions out of my mouth when I saw the menu was, “what is it on?”  You know, since it wasn’t going to be an English muffin.  A waffle.  A waffle with bacon and cheese.  Topped with what seemed like maple bacon, a spicy hollandaise sauce and the most perfectly oval soft boiled egg I’ve ever seen.  I was already full by the time it arrived, but I dug in anyway.   A few other people at the table also ordered this, but were taken aback by the unexpected heat in the sauce.  I thought it pulled the waffle flavors in well, but I see how it isn’t like a standard Eggs Benedict which could bother some eaters.   A- 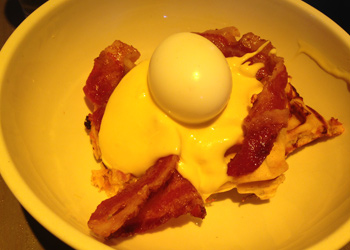 Greek Burrito – The term burrito is a bit of a stretch since they do not do tortillas yet.  Instead they do it in a crepe that they crisp up and roll.  It was filled with a flavored rice, feta cheese, olives and I believe spinach?  My friend ordered it, I tasted thought the flavors melded well together.  She loves Mediterranean flavors and was right up her alley.   B+ 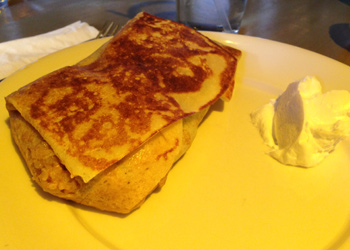 Belgian Fries – What exactly makes a fry Belgian?  I tried to look it up on my phone but didn’t get far.  I still don’t quite understand but basically you can expect a twice fried, thick cut French fry.  And it came with a garlic aoili dipping sauce if I recall correctly.  Another Greater Pittsburgh Celiac and Gluten Free Living Group member ordered them and I got to try.  Lightly seasoned and fairly crunchy.   There were tons of them though and a little high in price for my taste.  If I had a bunch of people there, absolutely.  B 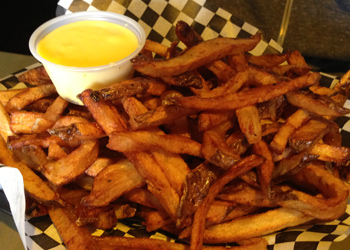 Crepe – I didn’t try the crepe but another member did so I took a picture.  It looked light and had nice color.  He seemed to be happy with it. 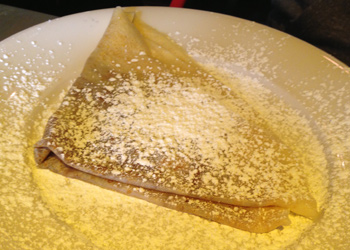 I’d also like to point out that I saw at least some gluten free ciders in the fridge there and would guess they have gf beer, but didn’t think to ask.  It could shape up to be a nice date night out for your gluten free guy, girl or couple.  Safe and all in one place.