Cakes aren’t just for birthdays or anniversaries, especially in my family.  If there is a reason for cake, then there is probably cake…now there is gluten free cake instead.  First time for everything, I guess.  I’m more of a pie person though, so I hadn’t ventured into the world of gf cake baking yet, but I have had a number of tries with gluten free brownies, cookies and other random baked goodies. 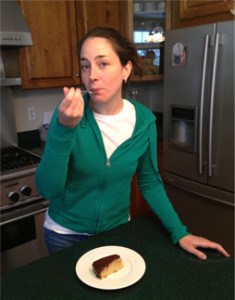 Yesterday, my mom let me know she baked a celebratory cake for my dad, and I decided to pop over and taste a slice.  My mom is a pro at making cakes, boxed and from scratch; they are always light and soft…and gone within the day.  She opted for Betty Crocker’s Gluten Free Yellow Cake Mix and slathered it with Duncan Hines Creamy Classic Chocolate icing.  Very basic since it was a first gf attempt.  It wasn’t bad if you are in a bind and it’s a reasonable option for people who are scared of kitchen appliances. However, it wasn’t like the other 99% of cakes of hers that I devoured in the past.  As with many gluten free cakes (not BabyCakes, they were phenomenal), it was a texture problem not a taste problem.  It left a slight gritty remnant, for lack of a better explanation.  Now, I’ve always been a girl who preferred box over scratch (sorry but I do), but this made me wonder if scratch wouldn’t work better? 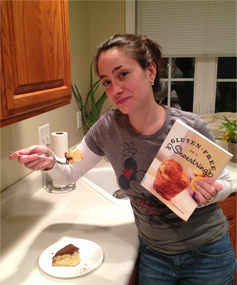 Testing My Gluten-Free On A Shoestring Perfect Yellow Cake, January 9, 2014

Tonight, I decided to give it a whirl of my own with the Perfect Yellow Cupcakes recipe from my Gluten-Free On A Shoestring cookbook (using Bob’s Red Mill All Purpose Gluten Free Flour).  It was an experience…and rather than get overwhelmed by some oddities in the process, I wish I had thought to take some pictures of what I saw.  For example, my batter at one point was the consistency of bread dough and was slowing down my hand mixer to a near stop.  In all fairness, the recipe warned that it would become more elastic, which meant that the xantham gum had been activated, but this was happening prior to me getting to that portion of the recipe.

I decided to press on though because either way, I really should figure out a basic gluten free cake recipe for future purposes.  I popped it in the oven and set the timer, the first timer that is.  You had to cut the temperature part of the way through and then bake it longer.  I did this, even opening up the oven for a minute or two to drag the temperature down.  I also set the second timer for fifteen minutes less than suggested.  (I’ve learned from my own experiences to pull it out early and let it finish up in the hot pan on top of the oven.  That’s how we get them light.)

It was cooked through already when I pulled it out!  Darn!  I flipped it out of the pan immediately to get the heat off of it and let it cool, but I felt a bit defeated.  I almost ran out and bought more milk to have a redo, but I still had to make dinner so I let it go.  A bit later, I started picking at the side and realized that the inside was actually pretty soft.  I was surprised!  I decided to frost it with the same brand my mom used (so the only difference between them was the cake itself) and give it a try.  It isn’t bad at all and I KNOW it could have been even softer if I had cut the time even more than I did.  Maybe I should be baking cakes more again?  Better yet, I wonder what my mom could do with this?!

This was an added bonus when I went to the store.  Notice anything? 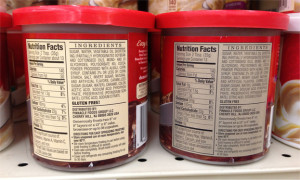 New version is on the left.  Look at that labeling!